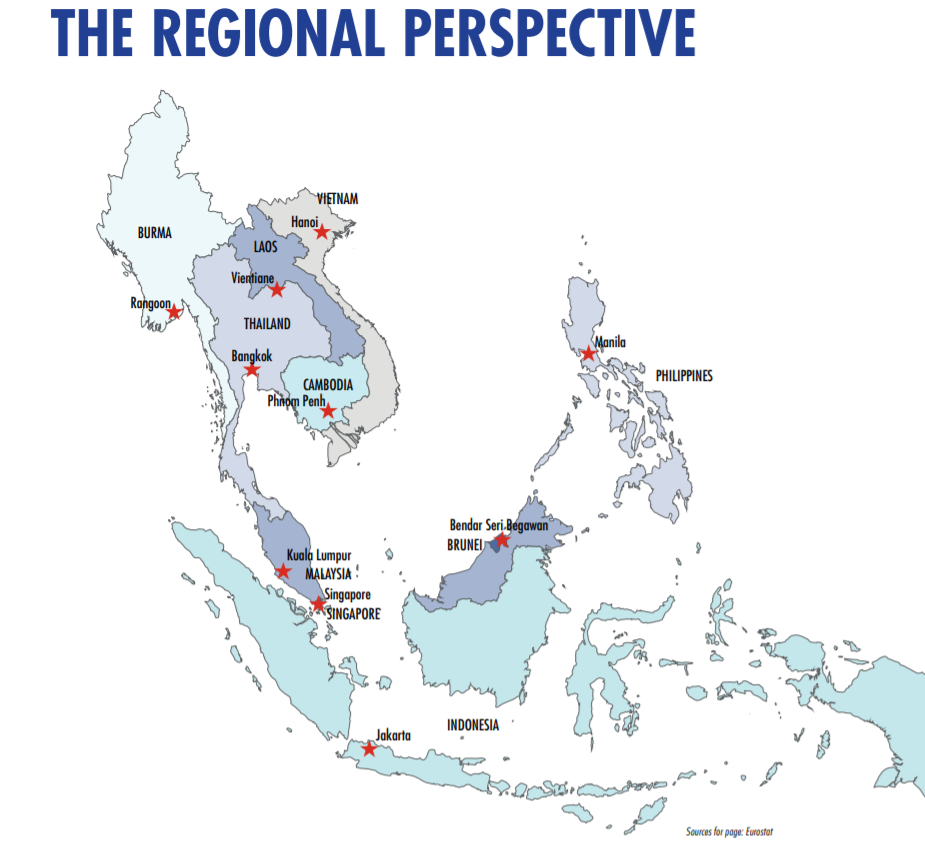 The European Union and the Association of Southeast Asian Nations (ASEAN) continue to deepen their relationship while working towards the establishment of a Strategic Partnership. This decision to upgrade relations was taken by the EU and ASEAN countries’ Foreign Ministers at the EU-ASEAN Ministerial Meeting on 21 January 2019. EU-ASEAN (consisting of Brunei Darussalam, Cambodia, Indonesia, Lao PDR, Malaysia, Myanmar (Burma), Philippines, Singapore, Thailand, and Vietnam) relations date back to 1977 when official “Dialogue Relations” began. In June 2015, the EU confirmed the adoption of a new strategy “The EU and ASEAN: a partnership with a strategic purpose”. In August 2017 during the EU-ASEAN Post-Ministerial Conference, the second EU-ASEAN Plan of Action (2018-2022) was agreed.

The EU has concluded negotiations for Free Trade Agreements (FTA) with Singapore and with Vietnam and is negotiating FTAs with other ASEAN countries (Indonesia and the Philippines). In March 2017, the EU and ASEAN agreed to take new steps towards resuming talks for a region-to-region agreement.

The EU is ASEAN’s second largest trading partner and ASEAN’s biggest provider of Foreign Direct Investment. In 2018, ASEAN exported over €140 billion to the EU and the EU €97 billion to ASEAN. In 2017, the EU held an investment stock of €337 billion in the region and ASEAN a stock of over €141 billion in the EU. Each year, 10 million people travel between the two regions, of whom 7 million are EU citizens who travel to ASEAN.

<< Back to listings
Go to Top
We use cookies to ensure that we give you the best experience on our website. If you continue to use this site we will assume that you are happy with it.Accept