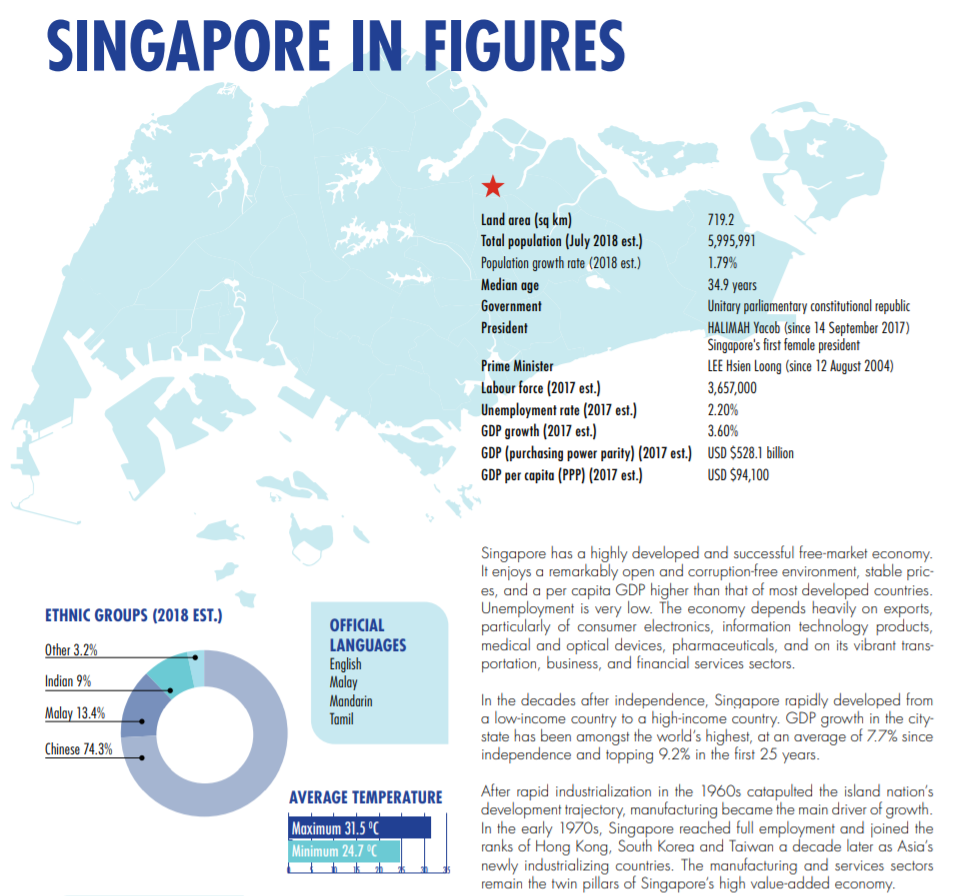 Singapore has a highly developed and successful free-market economy. It enjoys a remarkably open and corruption-free environment, stable prices, and a per capita GDP higher than that of most developed countries. Unemployment is very low. The economy depends heavily on exports, particularly of consumer electronics, information technology products, medical and optical devices, pharmaceuticals, and on its vibrant transportation, business, and financial services sectors.

In the decades after independence, Singapore rapidly developed from a low-income country to a high-income country. GDP growth in the city-state has been amongst the world’s highest, at an average of 7.7% since independence and topping 9.2% in the first 25 years.

After rapid industrialization in the 1960s catapulted the island nation’s development trajectory, manufacturing became the main driver of growth. In the early 1970s, Singapore reached full employment and joined the ranks of Hong Kong, South Korea and Taiwan a decade later as Asia’s newly industrializing countries. The manufacturing and services sectors remain the twin pillars of Singapore’s high value-added economy.

The overall growth of the Singapore economy was 3.2% in 2018. Value-added manufacturing, particularly in the electronics and precision engineering sectors, remain key drivers of growth, as are the services sector, particularly the information and communications industries, which grew 6.0% year-on-year, and the finance & insurance industries, which grew 5.9% year-on-year.  Economic growth is expected to moderate in 2019, with the government forecasting a range of 1.5% to 3.5%, projecting the rate to be slightly below the middle of the forecast range.

In the most recent World Bank Human Capital Index, Singapore ranks the best country in the world in human capital development. This means that a child born today in Singapore will be 88% as productive when she grows up, as if she enjoyed complete education and full health. Together with strong financial support from the government, the country continues to strengthen the nimbleness and flexibility of its workforce by providing continuing education such as the Skillsfuture initiative. Government spending on continuing education will nearly double, to more than S$1 billion yearly.

<< Back to listings
Go to Top
We use cookies to ensure that we give you the best experience on our website. If you continue to use this site we will assume that you are happy with it.Accept