On the 6th of June, the Regional Trade Committee met to discuss the topic of “The impact of the implementation of the WTO’s TFA and ASEAN’s CSAP”. We heard from two great panellists, Ms Shanti Shamdasani, Senior Director Public Policy, DHL, and Ms Sanchita Basu Das, Fellow and Lead Researcher (Economic Affairs), ISEAS-Yusof Ishak Institute. The discussion was moderated by the Committee’s chairman, Mr Frank Debets, and it addressed several topics including:- Realistic time frame of meaningful implementation;
– What can companies do to help governments implement;
– Which measures will have to biggest impact;
– Which measure are politically most contentious;
Thereafter, the Committee engaged in a successful Q&A discussion whereby members were able to share insights and ask questions.

Shanti Shamdasani is known for her in-depth expertise on ASEAN matters with focus on international trade and political analysis. Her vision on ASEAN started in 2005 where she tirelessly brings the ASEAN debate at various local and international stages.
Ms. Shamdasani served with the office of the President of Indonesia, H. E. Susilo Bambang Yudhoyono on ASEAN matters as Advisor reporting directly to the President’s immediate team; working closely with various Ministers to drive a strategic debate on trade negotiations with India, China, Australia and New Zealand.
Her current role at DHL continue to reflect her passion and long term vision on policy, legal, trade and political framework in the region; she is the President of ASEAN International Advocacy (She founded ASEAN International Advocacy in 2005) and sits at the Boards of several Associations as Governors, Advisors, Chairwoman and Commissioners. 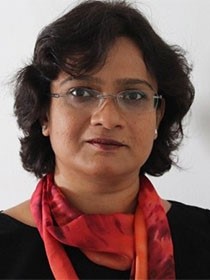 Ms Das holds concurrent duties as the coordinator of the Singapore APEC Study Centre and co-editor of Journal of Southeast Asian Economies (formerly the ASEAN Economic Bulletin). Prior to joining the Institute in 2005, she was an economist in the private sector involved in infrastructure consulting, manufacturing and banking.

Sanchita holds an MBA from the National University of Singapore (NUS), and an MA from the Delhi School of Economics (under University of Delhi), India. She is currently pursuing her doctorate in International Political Economy at the Nanyang Technological University (NTU), Singapore. Sanchita has authored and edited numerous books and book chapters, policy papers and opinion articles. Her research interests include – economic regionalism in ASEAN and the Asia-Pacific Region; international trade; and economic development issues like connectivity.

This meeting was for EuroCham Members only.